This research project investigates how acoustic and vibro-tactile signals can be used to provide cyclists with necessary navigation instructions while maintaining the ability to perceive ambient sounds and keep attention to the environment. In addition, the focus is placed on the experience of guided navigation with a non-visual, multi-sensory system.

Bicyclists are increasingly shaping the picture of urban traffic. Regarding guided navigation, conventional navigation systems do not offer a safe and satisfying solution. Voice instructions are often perceived as annoying and far too detailed. Additionally, the usage of headphones to hear these instructions reduces the hearing and localization of environmental sounds significantly. Visual information on the other hand, draw the attention away from the main traffic situation. This affects the ability to react to and interact with other traffic participants and results in a feeling of insecurity.

To design for urban cyclists and discover problem areas and design opportunities, one first needs to understand the experience of cycling with all its aspects as good as possible. Methods such as desktop research and interviews alone cannot capture the complexity of this physical activity and its dependence on contextual factors for the experience. In order to investigate and answer the question how a non-visual, multi-sensory navigation system for urban cyclists might look like, some questions had to be answered beforehand. The combination of videography, bodystorming and unstructured interviews was therefore chosen to get the best possible understanding of the cycling experience and answer the following questions:

As cycling is a bodily outdoors activity and its experience is highly dependent on a multitude of factors, Research, Fieldwork and Tests were performed in 3 different european cities. The analysed results from the interviews and bodystorming exercises showed that factors like traffic infrastructure, density and composition of road users, pavement, noise level, bicycle type, time of day, and weather conditions have a significant impact on the cycling experience.

This process phase was characterised by exploring the sensation of vibro-tactile stimuli, finding the right accoustic signals, continuous iterations, and testing of all components.
Some leading questions were: 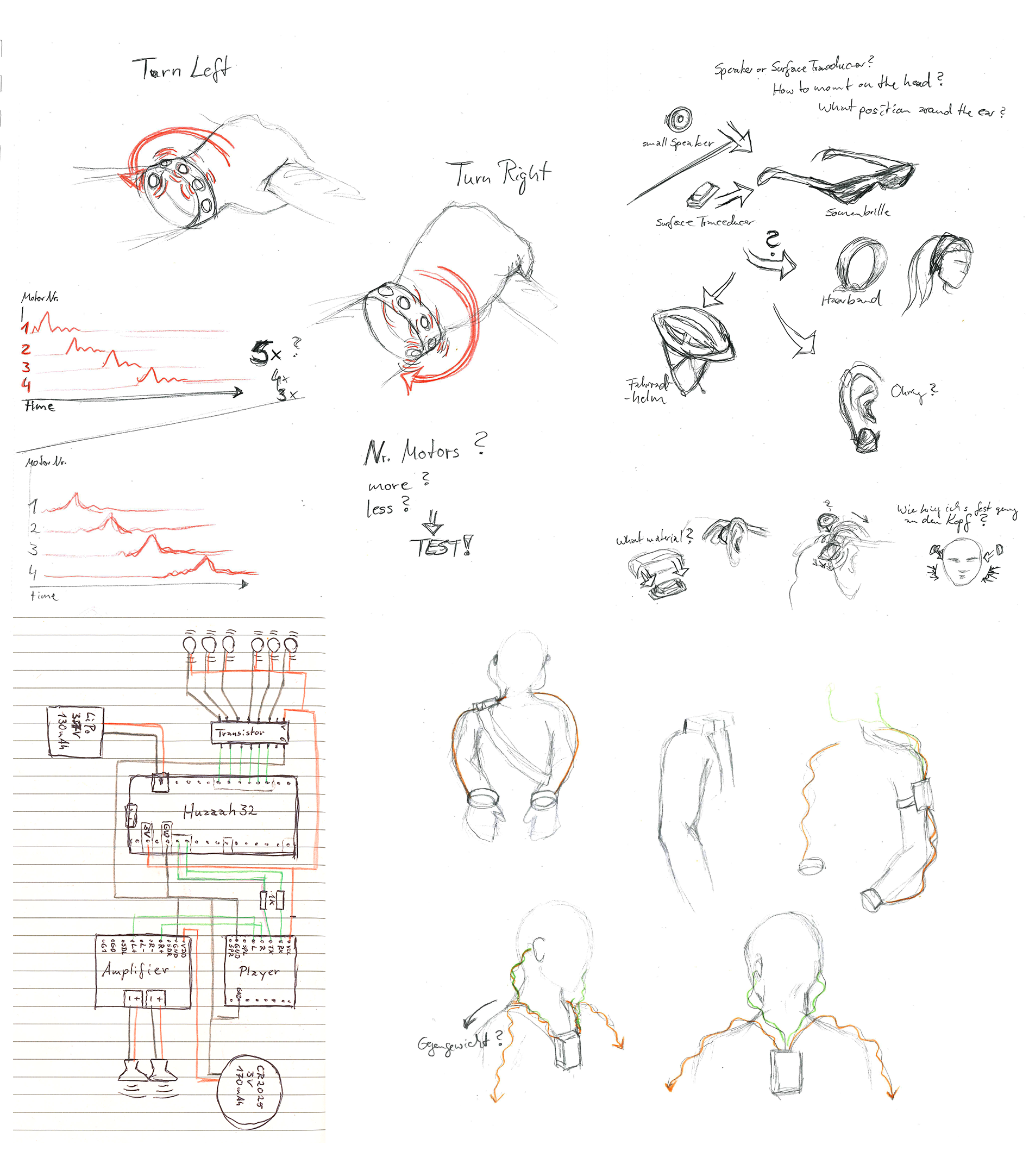 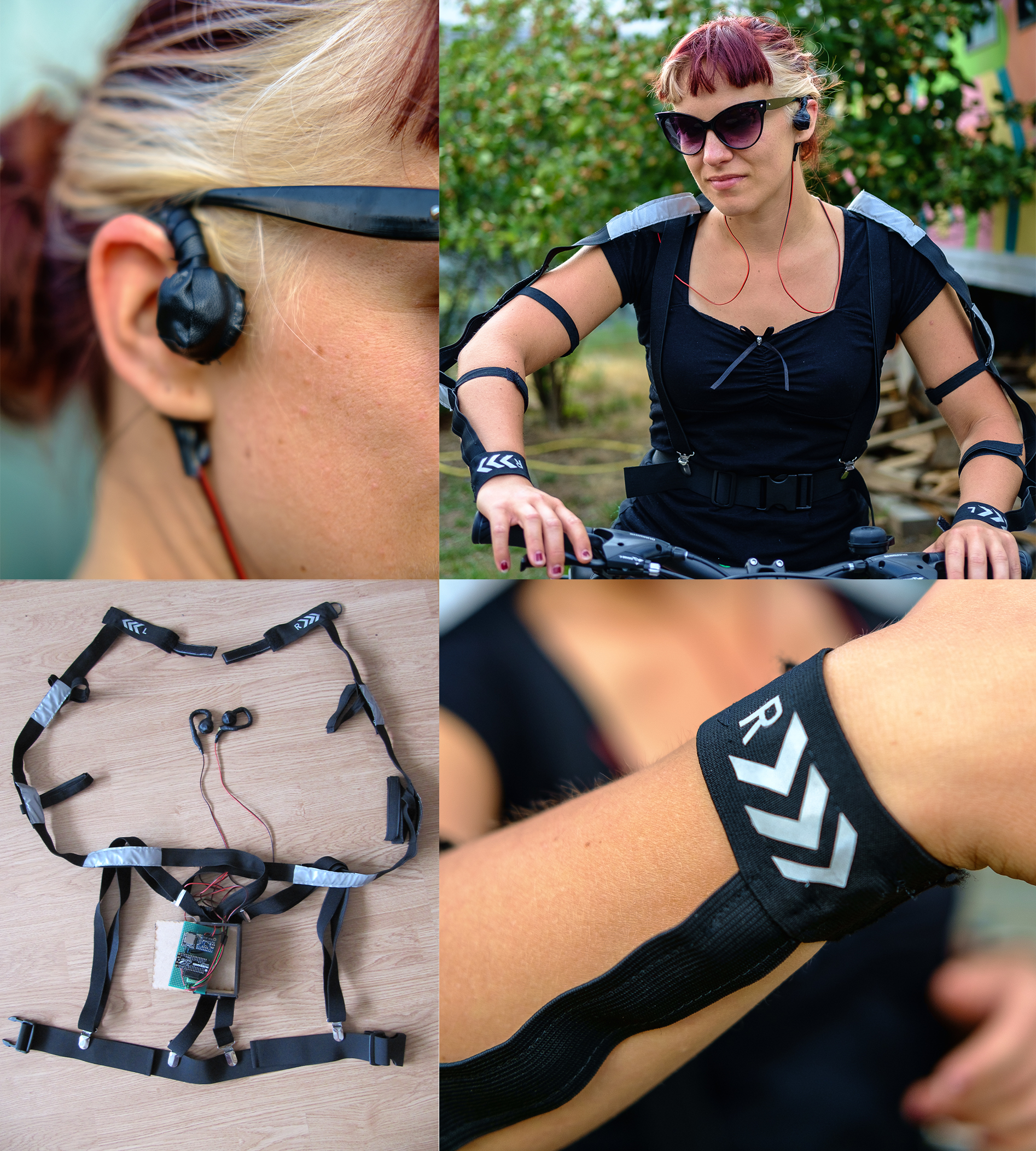 
The final prototype was tested with a total of 25 participants in 4 cities with different bicycle infrastructure. To determine the influence of external factors on the navigation instructions, tests were conducted on different types of roads and pavements, under different weather conditions at different times of day, different noise levels, and bicycle types.

For tests in the field, a smart-phone was mounted on the handlebar of the bike from the researcher. The researcher was riding behind the participant and sent commands via the smartphone to the control unit to trigger an acoustic navigation instruction, a haptic one or a combination of both. The participants were asked to react according to their interpretation of the information they received. Using the Think-Loud method, participants were asked to verbalize their thoughts directly during the test.If consent was given beforehand, the test was recorded with a GoPro. After completion of the test semi-structured interviews were conducted, which were audio recorded.

After combining and analyzing all the test data gathered, the following findings could be identified: